Historical architecture in the heart of Leipzig

For tourists and architecture enthusiasts the Mädler Passage is a must as part of any visit to Leipzig. It is the heart and soul of a Central European concentration of shopping arcades that stretch across Leipzig’s city centre. The Mädler Passage is also a testament to the architectural splendor of the civic house culture that existed 100 years ago.

The Mädler Passage was constructed between 1912 and 1914, under the supervision of commercial councillor Anton Mädler, on the historic site of the residential complex “Auerbach’s Hof”, located between the Leipzig city landmarks of Grimmaische Straße and Neumarkt. This was the result of an architectural design competition, won by Theodor Kösser, who served as building advisor to the King of Saxony. His design was a combination of an inner-city exhibition hall and a shopping arcade.

The Mädler Passage had over 8,000 square metres of exhibition space spread across 4 spacious upper floors. The shopping arcade served an impressive vestibule that lead on to the six staircases of the exhibition hall.

In contrast to Leipzig’s other arcades that serve merely as access routes to other areas, the Mädler Passage is a genuine shopping and browsing arcade. The quality of its street-facing facades extends to the building’s interior and the whole structure is covered by glass roofing. This overall aesthetic is the perfect compliment to a day of shopping and relaxing. 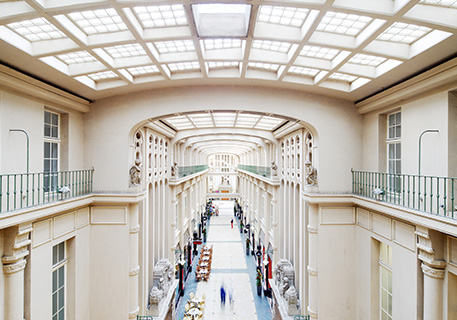 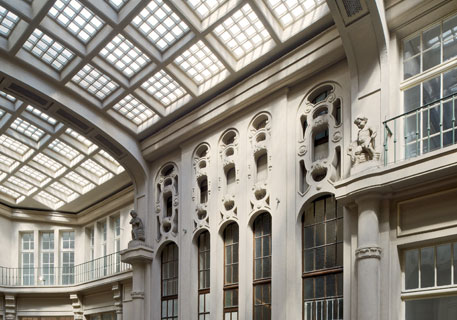 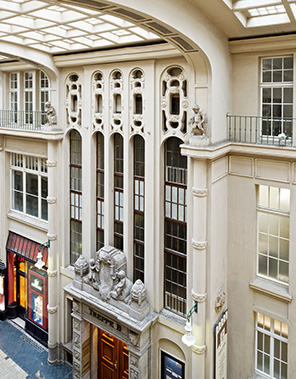 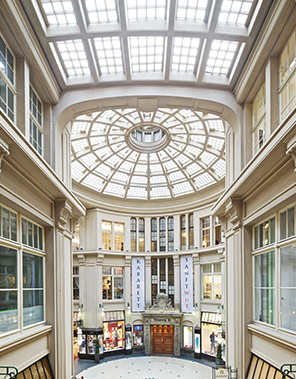 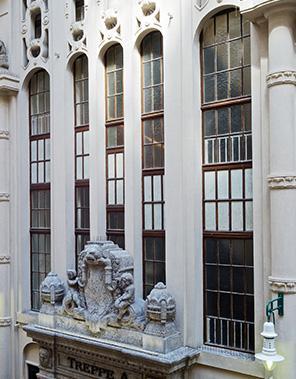 The arcade’s glass roof - a coffered, reinforced concrete-rib structure with glass blocks at a height of about 13 metres - was considered in its day to be an architectural masterpiece. Below this roof are the ground floor and two additional levels, while there are also two more floors above it. The basement level is home to the vaults of Auerbach’s Cellar.

The Mädler Passage is 140 metres long overall and, at different points, between five and seven metres wide. It runs from Grimmaische Straße, opposite the south side of the old town hall, via an octagonal rotunda to Neumarkt. Grimmaische Straße is home to the more resplendent of the two outer facades, a pure natural stone structure made of bright sandstone. The entrance to this prominent and central Leipzig city location is provided by a round-arch portal which ascends to the building’s first floor. The portal is flanked by two life-sized female sandstone figures. One is holding a vase and the other a grape, symbolizing the building’s function as porcelain exhibition hall and wine bar.

Just behind the Grimmaische Straße entrance, the Mädler Passage widens into a hall. This is where the two staircases leading down to Auerbach’s Cellar are located. Two facing bronze figures by the Leipzig sculptor Matthieu Molitor rest on balusters. These portray the cellar scenes from Faust, in which Mephistopheles casts a spell over the gathered students.

Essential information and a closer look at the vaults of Auerbach’s Cellar.

The path through the Mädler Passage runs along a host of distinctive shop fronts and the six entrances to the upper floor staircases. These staircases, also notable for their striking architectural design, lead to the former exhibition spaces, some of which were converted into offices as part of renovation work in 1997. Entrances A, B and D feature classical frames depicting shield-bearing cherubs and are flanked by vases on both sides.

The Mädler Passage rotunda has a diameter of 12 metres and is approximately 15 metres in height. The rotunda is covered by a glass dome. In 1970, a Meissein-porcelain Glockenspiel was erected at the passage leading to the Petersstraße. This was subsequently re-installed in 1997.Today, classical songs or folk melodies ring out from this spot on the hour.

The southern corner shop at the Neumarkt exit features one fascinating detail that dates back to the former historical site of the arcade: the baroque ceiling fresco of “Helios in his chariot”. It was discovered by chance during the demolition of “Auerbach’s Hof” at the start of the 20th century, before being carefully relocated to the southern corner.

The architecture of “Auerbach’s Cellar” stems from as far back as the 17th century. This historical barrel-storage cellar is notable for its characteristic barrel-shaped vault and its elaborate paintings. The painter Heinrich Bey created these works in 1867 to immortalise scenes from Goethe’s Faust. A carved chandelier featuring Faust riding a barrel – produced by the Starnberg native Max Stolz – further adds to the historical and literary significance of the vault interior. The rooms dedicated to Goethe and Luther feature late-gothic, cross-ribbed arches.

Would you like to lease an office or retail space in the historical ambience of the Mädler Passage? Contact us for all the information you need. We will provide you with a fast quotation, our terms and conditions and a viewing appointment. 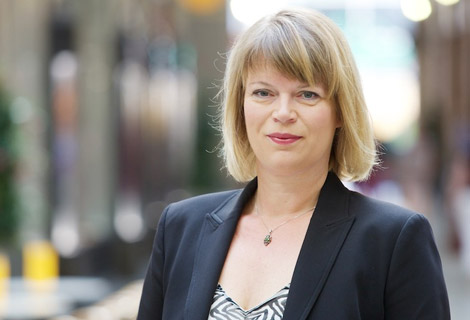 We are happy to provide high-resolution images and logos for journalistic and marketing publications upon request. Please contact us via our press page. For further queries, use the contact information above.

„One can discover some new detail in the Mädler Passage every day. Its architecture is truly fascinating“